We continually work to find ways to improve the quality and efficiency of our services and systems. Each new client benefits from our knowledge and the improvements we have made to our services, technology and infrastructure. PetData has a proven track record, increasing licensing by an average of 42% for our clients while also reducing costs associated with administering a successful program. We have helped our clients improve and expand services offered to pet owners and we assist daily in reuniting pets with their owners.

With PetData's years of experience and numerous satisfied customers, no other company has our capability to meet your needs. Our senior staff has more than 303 years combined experience in animal licensing. PetData makes animal licensing easy! 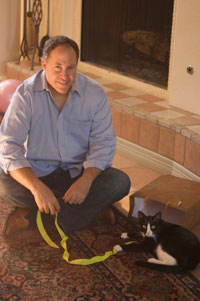 Chris is the founder and President of PetData. He was also the founder and President of SafetyNet, Inc. which originally developed the animal licensing division. Chris previously worked for Continental Bank as a Second Vice President, and at Prudential Capital as an Associate Investment Manager. He received his Bachelor of Arts from the University of Georgia with degrees in English and Spanish. He received his Masters of Business Administration from Rice University with a double major in Finance and Accounting. Chris shares his home with his family, and their two rescued cats.

Flame's full title is "Lucky Flame," so named because he and his sister were fortunate enough to be rescued from a horse farm in Oklahoma where his mother and other littermates met an untimely death. His irresistible blue eyes and talkative personality made him an instant family favorite when he was given to Claire as a special 8th birthday surprise.

Pingu is named after our family's favorite mischievous claymation penguin. Rescued at four weeks from a neighbor's garage after her mother disappeared, Pingu was quite tiny when we adopted her. She is now healthy and frisky enough to give Flame a run for his money, chasing him across the house on a regular basis. 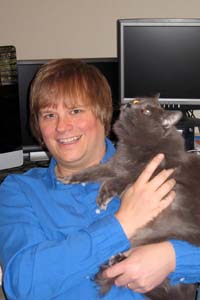 Brian is co-founder of PetData, and has over 20 years experience designing data systems. He designed and wrote TAILS, the proprietary system PetData uses to handle client operations administering animal licensing programs. Brian is also responsible for all of PetData's Information Technology and Information System operations, including the development of internal software and online services. Brian began his IT career as Information Systems Director of SafetyNet, Inc. where he developed and maintained all key information systems of both the vehicle and animal licensing divisions. He was previously general manager of a multi-million dollar retail and mail order operation where he supervised in implementation of POS and order processing systems. Brian and his wife miss their kitty, Chloe very much, and are learning to adapt to having a new, large dog in the house.

Chloe and her sister, Rita, were found near a Taco Bueno dumpster almost 15 years ago. Lured into the car with the promise of taco meat, they quickly adapted to their new life as slightly spoiled housecats. Sadly, Rita passed away several years ago, and Chloe crossed the Rainbow Bridge to join her earlier this year. 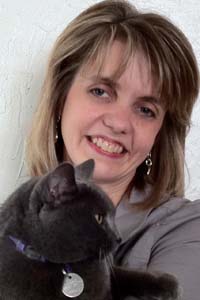 Marilee is primarily responsible for PetData's client relationships. She manages the startup phase for each new client, provides monthly, quarterly and annual reports, coordinates client requests for special reports and new features, and works with clients to implement ordinance changes and new licensing initiatives and procedures.

Marilee has been with PetData since 1997 and has served various roles with the company including customer service, operations management, and human resources. She graduated from the University of Minnesota, Morris with a degree in Sociology. She lives in Irving Texas with her husband, two daughters, a dog and a cat.

Ellie, a border collie/beagle mix, was adopted from a local humane society at the age of 10 months. She is learning that visitors are okay and rawhide treats are far better than stolen paper. Ellie shares her family with a talkative gray cat, Gabby, who lived at the house with its prior residents and had no intention of moving. 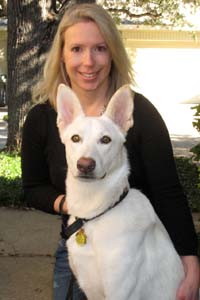 A 20-year veteran of the communications field, Ann joined PetData in 2010. She handles sales and outreach, spreading the word to municipalities about the benefits of outsourcing animal licensing. Ann has worked in Animal Welfare since 1998, serving in local, regional and national capacities with a variety of organizations. Accredited in public relations (APR), Ann received her Bachelor's degree in Communications-Public Relations from Stephens College.

A Chicago-area native, Ann currently resides in north Texas with her husband and their amazing Pocket Shepherd, Bolt. Bolt was adopted in 2010 from a local animal control, and, true to his name, fully believes he has super-dog powers. He's slowly learning that his super-bark is ineffective, as is his laser-stare, and that sitting nicely is almost always a better solution than jumping up. 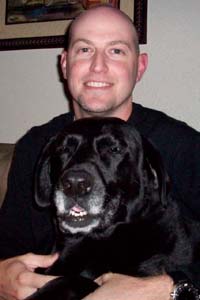 Mark is responsible for the daily operations and customer service for each of his accounts. He currently manages 13 of PetData's accounts and will take on more as PetData continues to grow. He also supervises the mail-processing department and is involved with staff training.

Mark has been with PetData since 2001 and has served in various roles including a customer service representative and customer service manager. He graduated from Texas Tech University with a degree in Marketing. He lives in the Dallas area with his wife, two children, and their dog, Lucy.

Lucy is a black Lab, and a big hit in the Gilbert household. She's either outside playing ball with his son, or being used as a pillow for his daughter to sleep on. Lucy also has Mark trained to the exact time every day of receiving her daily treat.